Sharing this adorable image called Polar Bear and Friend from KLM Digital Designs today from the January release. This set comes with 3 sentiments, “You are Amazing”, “You’re My Sunshine on a Rainy Day” and “Best Friends Forever”, which I used on my card. 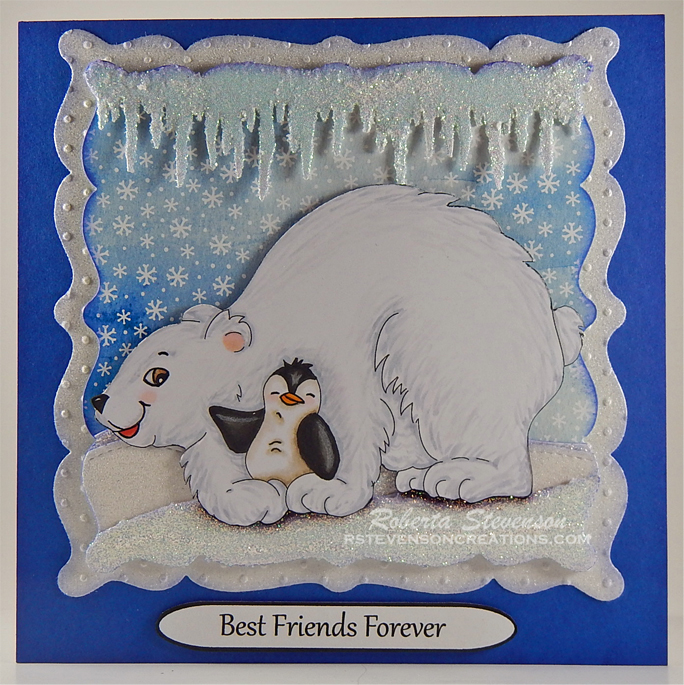 To make the card, I printed out the main image onto Copic Marker X-Press It Blending Card using my HP Printer. I used my Brother Scan and Cut to cut around the image and coloured it in with Copic markers. The sentiment was brought into Microsoft Word.  I imported the shape within Microsoft Word and used a weight of 3 for the solid line. Then, I brought the sentiment to the front and centred it in the middle of the shape. I printed this out on Recollections White cardstock and then just fussy cut around it.

I used AC White paper to create the base shape of the card 12″ x 6″. I scored the paper at 6″. I used Recollections – Blue Ombre Cardstock for the main background, cut to the same size as the base card. This was attached using double-sided tape.

Essentials by Tattered Lace Dies – Easel Slider dies and my Cuttlebug were used to die cut Hot Buy Craft Smart – Holiday Glitz Glitter Paper, Hammermill – Premium Colour 100 lb. and Stampin’ Up – Snowflake Splendor Designer Series Paper. Penny Black – Winter Roof die was used to die cut the icicles. The snow drifts on the bottom of the card were die cut using dies from Lawn Fawn – Stitched Hillside Borders. Once the icicles and snow drifts were die cut, I used the Tattered Lace die cut again so that everything would layer to the shape of the smaller rectangle. I used my Cuttlebug and Cuttlebug – Snow Dots stencil twice to create the texture to the larger rectangle. Gina K Designs – Glitz Glitter Gel was added to the icicles and front layer of snow. Stickles – Diamond was used to add texture to the back snow drift. Once everything was dry, I inked around all of the outside edges of the snow, rectangular shapes and main background with Tim Holtz Distress Ink – Blueprint Sketch.

To assemble the card, I used double-sided tape to attach the large rectangle shape directly to the base card. The smaller rectangle shape was assembled separately, then attached to the larger rectangular shape using 3M VHB – 2 sided tape. Tombo glue was used to add the icicles and layers of snow to the smaller rectangluar shape. The image and sentiment were popped up using 3M VHB – 2 sided tape. To complete the card, Stickles – Diamond was added below the bear to create a shadow and also some streaks along the snow.

Check out some special savings for a limited time at KLM!! 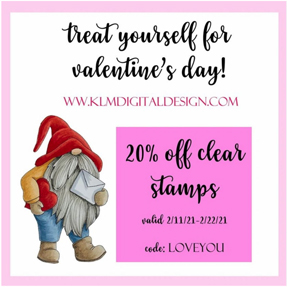 2 thoughts on “Polar Bear and Friend!!”